Military and economic treaty of 1961 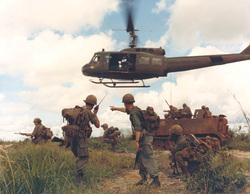 Evidence :
In 1961, South Vietnam signed a military and economic aid treaty with the United States leading to the arrival (1961) of U.S. support troops and the formation (1962) of the U.S. Military Assistance Command. Mounting dissatisfaction with the ineffectiveness and corruption of Diem's government culminated (Nov., 1963) in a military coup engineered by Duong Van Minh; Diem was executed. No one was able to establish control in South Vietnam until June, 1965, when Nguyen Cao Ky became premier, but U.S. military aid to South Vietnam increased, especially after the U.S. Senate passed the Tonkin Gulf resolution (Aug. 7, 1964) at the request of President Lyndon B. Johnson.

In early 1965, the United States began air raids on North Vietnam and on Communist-controlled areas in the South; by 1966 there were 190,000 U.S. troops in South Vietnam. North Vietnam, meanwhile, was receiving armaments and technical assistance from the Soviet Union and other Communist countries. Despite massive U.S. military aid, heavy bombing, the growing U.S. troop commitment (which reached nearly 550,000 in 1969), and some political stability in South Vietnam after the election (1967) of Nguyen Van Thieu as president, the United States and South Vietnam were unable to defeat the Viet Cong and North Vietnamese forces. Optimistic U.S. military reports were discredited in Feb., 1968, by the costly and devastating Tet offensive of the North Vietnamese army and the Viet Cong, involving attacks on more than 100 towns and cities and a month-long battle for Hue in South Vietnam.

Analysis:
During Diems term South Vietnam signed a Military and Economic treaty with the United States. The treaty stated the US would support South Vietnam with economic support and with its military. The treaty was important for the United States because President Kennedy began sending soldiers, advisors and military equipment into Vietnam. Under Kennedy the US made the MAAG (Military Assistance Advisory Group) which trained the South Vietnamese military and helped organize the government. Under President Johnson the US made a secret operation called OPLAN-34B Which collected information important for a military strategy over Vietnam. The treaty was a step way for the later Tonkin Resolution and allowed the US to send military support to South Vietnam.
Powered by